Close to 1.4 million tonnes of waste derived fuels were exported from England and Wales to mainland Europe for incineration during the first seven months of 2014, figures published by the Environment Agency have revealed.

This will mean that the overall volume of material exported to the continent, including refuse derived fuel (RDF) or solid 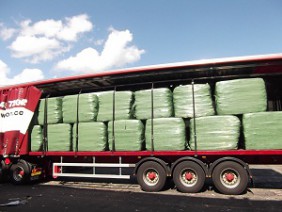 RDF is a fuel produced by shredding and dehydrating solid waste. SRF is a material with a higher calorific content, typically used in cement kilns or other industrial processes. Companies wishing to export the material are required to notify the Environment Agency of its final destination, to ensure it does not end up in landfill. The export data, which was made available through the Environment Agency’s website, shows that in total, 1,393,998 tonnes of waste derived fuels were exported to Europe up until the end of July.

Among the destinations for treatment, the Netherlands remains the largest market for waste derived fuels from the UK, with around 764,853 tonnes of material sent to the country up to the end of July.

Germany, Sweden and Denmark have also continued to be regular destinations for the material, with 289,972 tonnes, 205,703 tonnes and 75,171 tonnes sent to each of the countries respectively.

SITA UK was the largest exporter of material overseas, sending 217,917 tonnes abroad – predominantly to the Netherlands – during the seven months to the end of July. Biffa Waste Services was the second largest exporter sending a total of 203,145 tonnes overseas, followed by Andusia Recovered Fuels (118,784 tonnes) and FCC Recycling (106,049 tonnes).

Markets for RDF from England and Wales in 2014

Whilst the volume of waste derived fuels exported to the continent have continued to rise over consecutive years, some believe that the export of the material to energy from waste facilities in Europe should only be seen as a ‘medium term’ solution, and will give the UK time to increase its energy from waste capacity.

Defra carried out a consultation into the impact of RDF exports on the waste sector in the UK, and is due to publish its findings this Autumn.

Last week, industry representatives met at the Dutch Embassy in London to debate the future of the RDF market (see letsrecycle.com story). During the event SITA technology development director Stuart Hayward-Higham told delegates that demand from Europe for RDF is expected to continue to climb until around 2018/19, when more UK plants will be available